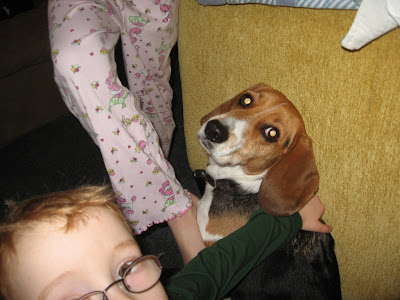 Well, I was a bit premature in announcing Poppy the puppy's joining of our family. she only lasted a few days before Eliza realized that puppy teeth are terrifying. We found her a nice new home to be friends with a wiener dog. But the desire to have a new dog wasn't dashed by the experience.

Sara found a 3 year old beagle named Buddy on craiglist, and we went to meet him. Who could say no to such a cute little guy??? He's got pretty good manners, loves to chase cats, knows a few tricks, and has a wiggle-bum like his "cousin" Hercules. The name Buddy didn't work for us because we call Abe our Buddy often. So, after much discussion, we came up with a name we all could agree on - Kevin. Eliza calls him Keveeeeen, like the big guy on 3-2-1 Penguins. Abe likes to call him Kevin 11 as in Ben 10. Emma hangs onto his old name with Kevin Buddy, but Sara's nickname has become most prevalent - Kevin Trevino. She's not sure where it came from, but it just sounds right.

He's a good dog, but this is one of the rare pictures of him. For reasons unbeknownst to us, he is petrified of cameras. Run-and-hide-under-a-bed scared. He and Dexter get along fine, enjoying cat patrol together.

Posted by Thomas Matelich at 7:16 PM No comments: